Since there's much talk about art in this section, but not so many actual works of art, this thread is an invitation to post the works you think deserve the title of masterpieces, or that have been influential in the history of art, or that just simply take your breath away.

Works of painting, drawing, sculpture, architecture, photography, etc., whatever fits for you into the category of great works of art. If you want to describe why, even better.
Top

I'll start with "Vieja Friendo Huevos", a painting from Diego Velázquez, the Spanish Baroque painter. I love from this painting the balance of shapes and colors and specially its realism, not only in the human figures, but in the objects. Look at the perfect shadows and reflections in the metal utensils.

Thanks for this thread. I look forward to contributions from members.
Top 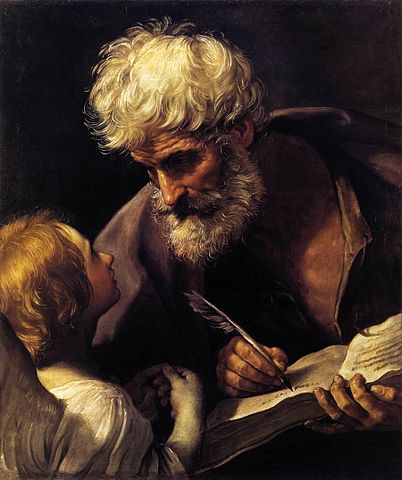 I like the realism, the light modeling, and the story that the painting tells.

Some of my favorite etchings from Italian 18th century illustrator, Giovanni Battista Piranesi. They depict Rome in ruins, almost swallowed by vegetation, the perfect scenery for the romantic spirit.

When you take into account not only the difficulties of the etching technique, but the intricate composition of the architectural details with lights and shadows, you can see why he was a true master. 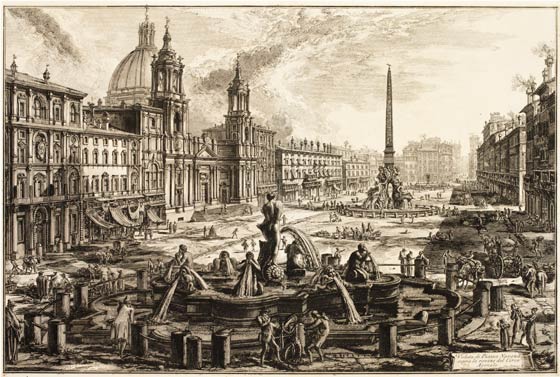 One evening after an aggravating day, watch this video. It can change your mood. Aivazovsky as the master of the sea and sky could do this. 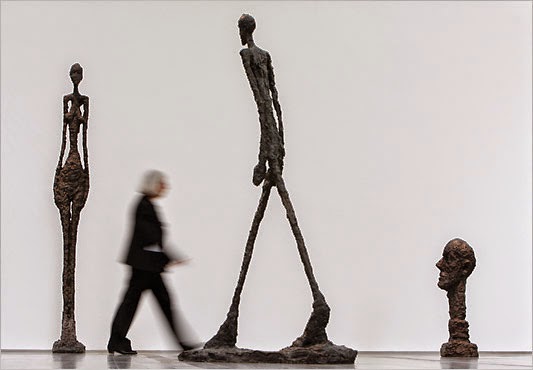 This is a masterpiece? "If you want to describe why, even better".
Top

Philosophy had something to do with it...


Alberto Giacometti is best known for his elongated, withered representations of the human form, including his 1960 sculpture Walking Man I, which in 2010 broke the record for a work of art at auction at $104.3 million. After experimenting with Cubism and Surrealism in forms influenced by primitive art, psychoanalytic theory, and toys, Giacometti broke from Surrealism and began his radical revision of the representational tradition in sculpture. Giacometti's severe figures explored the psyche and the charged space occupied by a single person. Linked to Jean-Paul Sartre and existentialism, they are seen as metaphors for the postwar experience of doubt and alienation.

...also on the cover of a philosophy book I bought many years ago...

As for masterpiece that's in the eyes of the beholder. If it were for sale at Value Village for $50.00 I probably wouldn't have bought it...which goes to show what a cultural clod I really am.
Top

This is a masterpiece? "If you want to describe why, even better".

When I was a kid, one particular book at school displayed several photographs of modern art and architecture. They were not directly related to the subject (it was a religion book), but the images were used to fill in the text and somehow illustrate vague abstract concepts. Among them, were the Giacometti sculptures, part of my love at first sight with modern art. And years later this particular figure stuck in my mind even more when I had the chance to see it in a museum in Basel.

Now these stylized figures have become cliche and mass industry has made sure everyone has something like it in their living rooms, but at the time they were innovative and reached the status of iconic of the modern art movement. I don't think they were hard to craft, but I do think they were brilliantly conceived. My very personal interpretation, or my a posteriori explanation of why I find them so attractive, is that as a middle step between figurative and abstract art, they sort of represent accurately the alienated condition of humanity in a technological society. It adds to this impression that they look kind of "quixotesque"in their stylization, perhaps a resemblance of Dore's illustrations.

Anyway, whenever I think of the first modernity (the legacy of constructivism, surrealism, cubism, the Bauhaus, etc.) the image that comes to my mind is one of a Giacometti sculpture.
Top

The first outdoor sculpture by Picasso in the USA (Daley Plaza, Chicago). Only a portion because there seem to be few images of the entire painting at less than 500px: 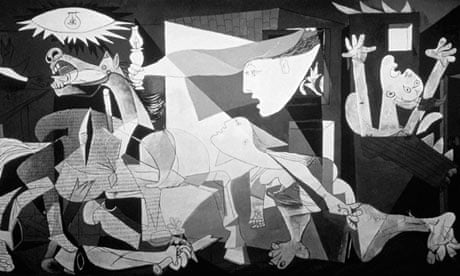 This is an interesting and informative thread, and I express my appreciation for the idea to the author of this thread.

Some interesting Picassoes were presented. Pablo Picasso once said: "If I had known there was such a thing as Islamic Calligraphy, I would never have started to paint. I have strived to reach the highest levels of artistic mastery, but I found that Islamic Calligraphy was there ages before I was."

Is written above in the form of a rose, "Bismillah", which can be translated in English as "In the name of Allah."
* * *

In the above mural sculpture is written in Arabic calligraphy, "Alhamdulillah". In English "Alhamdulillah" can be translated as "All praises and thanks be to Allah."

I find this calligraphic artwork interesting because there can be different interpretations of this work. For example, some people see the form of the work as a tear drop such that when one thinks of Allah, the Most Merciful, tears comes to the eyes as we long to meet Him. The latter interpretation is good. But I see it another way as well. I see it also as the flame of a lamp giving light to its surrounding. It was said in the OP that it would be even better if we could give our thoughts on the artwork. So, in my perspective I like the latter idea of a flame of a lamp giving light, for when a person praises Allah, the Most Merciful, his/her heart is illuminated with insight, understanding and wisdom. It reminds me of a verse in the Holy Quran which is translated as follows:

Allah is the Light of the heavens and the earth. The example of His Light is like a niche within which is a lamp; the lamp is within a glass, the glass as if it were a brilliant star lit from the (oil of) a blessed olive tree, neither of the east nor of the west, whose oil would almost glow even if untouched by fire. Light upon Light. Allah guides to His Light whom He wills. And Allah sets forth examples for mankind. And Allah is All-Knower of everything. [Quran, translation of meaning, 24:35]

Is written in Arabic caligraphy in the above floral-pear-shaped drawing, "Laa hawla wa laa quwwata illa billah", which can be translated in English as "There is no might nor power except through Allah."
* * *

As Pablo Picasso said, the Islamic civilization has achieved the highest level of artistic mastery in calligraphy. The mastery of the Islamic artists can be witnessed in mosque decorations. Some of these mosques are themselves masterpieces. For example the 400 year old Blue Mosque in Turkey.

More interior pictures of the Blue Mosque at: https://www.askideas.com/30-most-incred ... -istanbul/

More exterior pictures of the Blue Mosque at: https://www.askideas.com/40-most-amazin ... nd-photos/

Also here is a two minute youtube video by a happy tourist who provide additional perspectives of the Blue Mosque:https://www.youtube.com/watch?v=E4ur4Ag ... xa&index=1
Top

Is the Blue Mosque the same as the Hagia Sophia? What a beautiful place.

A friend of mine from Turkey is named Ebru, after the ancient Turkish art of paper marbling. Her name and what it meant was part of why I fell in love with her.