For philosophical reflections on the COVID-19 pandemic. How can philosophy help us to understand it, to combat it and to survive it?

swprs updates (they been busy beavers)

as always: keep a language or webpage translator open
Top

a doctor of my acquaintance sez...

Every year, 30,000 to 40,000 Americans die in automobile accidents, yet none of us is willing to give up cars to avoid the possibility of dying in a crash.

Heart disease kills more than 600,000 of our fellow citizens annually, yet we continue to eat fast food and pack on extra pounds.

Diabetes puts more than 80,000 Americans into their graves each year, yet we do not ban the use of sugar.

Close to 50,000 Americans take their own lives annually, yet we have instituted COVID-19 policies that have increased the incidence of suicide to the highest levels seen since the Great Depression.

Millions of children are infected with influenza each year, and hundreds die from the disease. But we have never closed our schools or insisted on masking the population to prevent the spread of flu.

Child abuse and child sex-trafficking are at record levels in this country, and many specialists believe that it is due, in part, to our schools being closed while adults are unable to go their normal daily routines.

The CDC estimated that as many as 500,000 people died worldwide from the H1N1 virus in 2009 – the first year that that virus circulated. Overall, 80 percent of H1N1 virus–related deaths were thought to have occurred in people younger than 65 years of age. Despite this, we didn’t close the schools, mask the population, or shut down the economy.

In 1968, the Hong Kong Flu killed approximately 4 million people globally. Not only did we not shut down our economy in the face of that staggering number, but the three-day Woodstock Rock Festival in upstate New York was held in the midst of the epidemic.

Isn’t it time we stopped living our lives and dictating what we can and cannot do based on fear of every new danger? Instead, shouldn’t we let each individual decide what risks he is willing to take?
Top

commentary by a buddy...

What is unclear about this?

It is a really pathetic pandemic where only 6% of deaths are due exclusively to COVID-19. Stack that up against the Black Plague, TB or Ebola.

The freak-outs want you to instead focus on the 94% who died with a plethora of comorbidity conditions. Some of the most common ones mentioned in the study are:

Patients with these other conditions also just happened to test positive for COVID-19, and that’s all it took to be recorded as a COVID death. What’s more, the average patient had an average of 2.6 of these other factors when they died.

Even a motorcycle crash victim who died on the scene tested positive for COVID. His death was recorded as COVID until some locals pointed out the sheer stupidity of such a categorization and it was ultimately rescinded.

OK, Look. Dying WITH COVID is not the same as dying FROM COVID. Only 6% died FROM COVID exclusively. The other 94% died WITH COVID.

Did anybody make an assessment of how many of the 94% would have died anyway, even if they did not have COVID? Nope. Not a one, so we’ll never know for sure. But even a baseball bat could figure out that there has been a significant number who were headed for their earthly exit no matter what else they contracted along the way.

But, why would Technocrats freak out so bad over this viral CDC announcement (pun intended)? Because it puts their entire narrative in jeopardy.

told ya so
Top 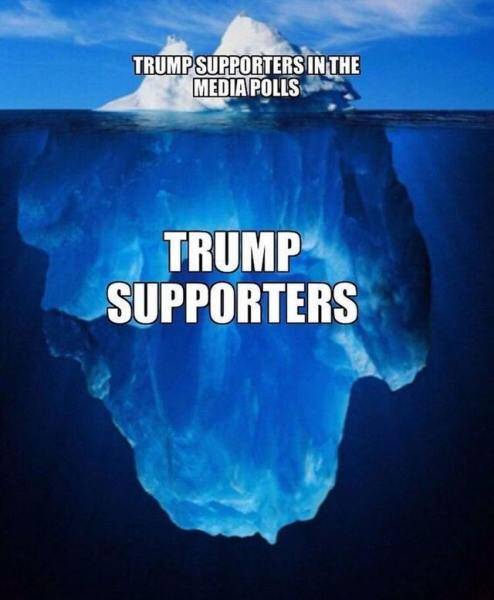 I hear that a lot (Trump voters & supporters bein' tight-lipped). Not sure it holds water. Here, in Louisiana, no one is particularly shy about backin' Trump.

Mebbe on the East & West coasts folks are more reticent, but in the broad middle of the country I think folks are fairly open about it.
Top

Trump supports American ideals. He rocks the boat. Of course it cannot be tolerated by the establishment built on corruption. Even to think such things puts you in danger of being eliminated by the cancel culture.
Top

Trump supports American ideals. He rocks the boat. Of course it cannot be tolerated by the establishment built on corruption. Even to think such things puts you in danger of being eliminated by the cancel culture.

I voted for him, and will vote for him again, simply cuz he's currently the best single weapon I have against the slavers.

As I say elsewhere: he's The Great Flummoxer
Top

Nick_A wrote: ↑Thu Sep 03, 2020 6:19 am Trump supports American ideals. He rocks the boat. Of course it cannot be tolerated by the establishment built on corruption. Even to think such things puts you in danger of being eliminated by the cancel culture.

I voted for him, and will vote for him again, simply cuz he's currently the best single weapon I have against the slavers.

As I say elsewhere: he's The Great Flummoxer

Such a liar is NATURALLY lying to you too. Why pretend that you know any truth from him?

This is your "employee". This is the dishonesty you support and perpetuate. Wake up, hire/support better people, and stop being a mindless pawn for a liar with mental problems.
Top

Trump supports American ideals. He rocks the boat. Of course it cannot be tolerated by the establishment built on corruption. Even to think such things puts you in danger of being eliminated by the cancel culture.

PolitiFact: garbage site run by, and visited by, garbage people.

Of course, that's not really the point, is it?

Play Diogenes with his lamp, lookin' for an honest man, and you'll be lookin' for a long time, especially in the political sphere.

Trump is no saint, and he's no paragon: I didn't hire him to be those things.

Wanna play the my sources vs your sources game?