Arising_uk wrote: ↑Wed Jan 31, 2018 2:22 amActually no, it's called sexual abuse which may or may not harm a woman's emotional or mental state.

Thats called circular reasoning. You are implying sexual abuse is evil because it's sexual abuse. But you don't seem to want to understand the underlying reasons behind it. I am giving an underlying reason of why sexual abuse is evil...it is evil because it causes mental illness and emotional damage. The underlying evil is the mental illness, emotional damage. If something causes no damage, it is not evil. Understand? If someone does something to you, and it causes you no damage, then it is injust to give them damage in return. And that forms the whole basis of the human moral system. Anything else is cultural brainwashing.


It boils down to what one calls 'harm', how about just 'Do no physical harm'. Another solution is for the homosexual to realise that rejection can part and parcel of trying to form a relationship, that and that he really ought to consider what 'heterosexual' means.

2 things. 'Do no physical harm' is not a culturally accepted moral framework. If an old man touches a child's penis but does not physically harm the child's butthole, then he has done no physical harm to the child, but has caused mental illness, emotional harm, on the child.
Other thing is, far as the "part and parcel" goes, slapping a woman's ass is part of her getting turned on sexually, yet society bans it.
All because society is geared and focused (brainwashed) to care about a woman's needs, but not care about male needs. (Ie. titanic philosophy, men need to die and women need to live.)

You think you can kill someone just because you were bullied in school?

What about the movie Moonlight. Hollywood seems to agree with me as it just released a movie that glorifies killing bullies. I think it won an Academy Award.

You can't go around slapping men either. It's called assault.

because we live in a pussy, panzy world of pathetic manginas.

i should not only be allowed to slap a man, but punch him in the face as well.

this is joker filozophy.
Top

Arising_uk wrote: ↑Mon Feb 05, 2018 2:30 amI think 'sticks and stones' is a good moral guide and one that many today ought to bear in mind but with respect to sexual matters I think informed consent is the major concern.

Not for all women and it's not banned by society if there is informed consent.


so for you, sending someone to prison to rot for years, get raped and be tortured is not punishment for some kind of psychological damage? But instead, punished for not doing the paper work of informed consent? So its not about the psychological damage of rape that we punish rapists, but the main reason we punish rapists is because, they didnt fill out the proper forms? okay.

in that case, send all the doctors who butcher baby penises (circumcision) to 50 years mandatory prison. they violated consent
Top

GreatandWiseTrixie wrote:so for you, sending someone to prison to rot for years, get raped and be tortured ...

Sounds like you need to sort your prisons out.

is not punishment for some kind of psychological damage?

No, it's for breaking the Law.

But instead, punished for not doing the paper work of informed consent?

You thinking asking someone is just 'paperwork'?

No, it's because they didn't bother to ask or didn't take no for an answer.

in that case, send all the doctors who butcher baby penises (circumcision) to 50 years mandatory prison. they violated consent

Informed consent but I agree that such practices should not be allowed. Although by-an-large our doctors don't do them over here unless it's for medical reasons but that's because they are under a nationalised health service and so are accountable.
Top

The OP does not appear to be a problem: it is a challenge to defend the harm principle. I do wonder why no one has really stepped up to plate on this.
After all, GreatandWiseTrixie argument is flippant, but is grounded in an apparent contradiction whereby doing no harm can lead to absurd conclusions.

First, the OP is a straw person argument: doing no harm is easily construed to produce absurd consequences by constructing absurd possibilities. Anything can be made to look absurd doing this: Man walks in the room and says, this is a democracy, therefore I get equal representation in the way the rules limit behavior and I do not want limitations on my desire to assault you; therefore, I am according to the principle of democracy justified in beating you senseless.

Any position can be reduced to straw, it just takes cherry picking a particular feature of it, and playing it out. In this case, doing no harm is seen as a conflicting principle such that one person's harm is another's good. Which to choose? The harm principle doesn't appear to say. It is the problem of utility, for Mill was a utilitarian, and a consequentialist, and the measure of right behavior issues from the balance of good over evil produced.

A thoughtful consequentialist would handle the situation thusly: you are the aged homosexual desirous of the younger heterosexual man. What to do? Well, do no harm; and this means attending to the other person's needs and desires as well as your own. The harm principle is a heuristic for approaching problems like this and is useful because it guides decision making toward conciliation.

you claim its idiotic but you never post any fucking argument ever other than stupid insults all the time. you are garbage

is pretty undignified. I wonder if you are aware of this.
Top

The no harm principle cannot even justify freedom of speech. After all, if I say something like, "Muhammad never existed," that will certainly harm many Muslims. One can't write off psychological harm, since it is a real harm, and we even know cases of depression can lead to a person dying. Free speech is typically justified by an appeal to utilitarianism --- that by allowing free speech, we benefit over-all, because debates can be used to sift the truth out from the falsehoods better than allowing a government official to do it for us. The do no harm principle, which anarchists love to rely on for all of their moral issues, is extremely limited and we cannot base civilized society on it exclusively.
Top


Which brings to my next topic "Do no harm" as a robotic framework for society.

It is kind of a group delusion where the sheep of society can't really see the world clearly. 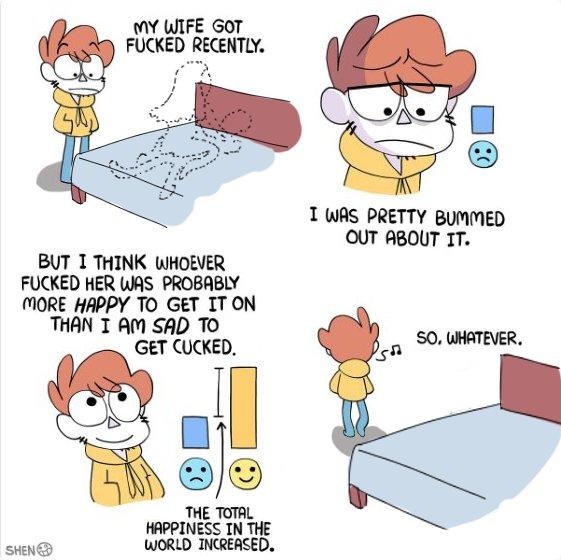 This is a moral dilemma because even if you escape the framework of egoism there is still clear damage.

However each scenario works on a case by case basis. For instance in the case of murder it should first be analysed, did the person deserve to die, and was the murderer oppressed by the victim. If the person did not deserve to die, and the murder lived a good and happy life, then actually the murder should be given some sort of brain surgery to wipe their old personality and thus not be a threat to society. However if the murder was oppressed by the victim or society (in the case of highschool bullying) then all charges should be dropped against the murderer and no punishment reached.

You're such a selfish twit!

When any two individuals preferences clash, the only solution is for them to go their separate ways to seek in another, that which is mutually desired.

That indeed was all for your edification!

Again, if there are no moral absolutes, why should I be at all bothered by the prospect of your rights being trampled?
Top

"Do no harm." isn't wrong, just insufficient. In order for freedom and responsibility to be meaningful, people must be able to make decisions such as what is harmful for themselves. Additional guidance is needed for practical application.

Also, it's negative ethics - what not to do. I propose the positive correlate - Noblesse Oblige. In its ordinary form it means the duty of society's "elites" to those under them. I propose it be extended universally to mean that in whatever way you are privileged you should help those who are less fortunate. For example, beautiful people owe some moral obligation to the ugly, happy people should help the depressed, and yes, the rich have a moral obligation to reduce poverty.

That does not imply that some nameless government bureaucrat should decide how those prescriptions should be used. It is necessary for practical reasons at least for everyone to work that out for themselves.
Top
Post Reply
26 posts