Boris Groys on what art is

A good artist is one who controls the communication over his person. Good at PR = good artist.
Top

You could ask an artist why he puts paint on a canvas? and he would answer, "Because it's There".
Top

thedoc wrote:You could ask an artist why he puts paint on a canvas? and he would answer, "Because it's There".

Are you saying first the canvas then the artist?
Top

For the dining room.... looks very similar to mealtime at my house 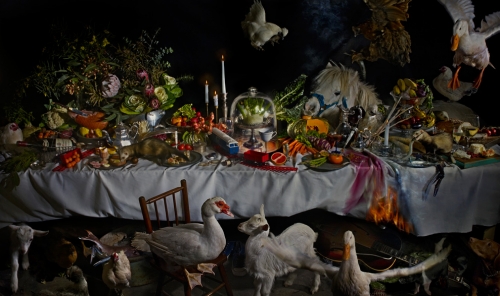 by my photographer friend....

I've always found art to be vacuous, and certainly nothing I've read here makes me change my mind. You watch or read an interview with an artist and the ego and pretentiousness shine through.

Artists / creative types - make something useful, like a house, furniture, clothes (as long as it isn't 'fashion') - from sustainable materials. Beauty - don't even think about competing with nature, and if you have something interesting to say, then say it.
Top

I find actions that are preformed with a high level of skill, to be artistic.
Top

Art is that which cannot be anything else
Top

The nature of art has been described by philosopher Richard Wollheim as "one of the most elusive of the traditional problems of human culture". Art has been defined as a vehicle for the expression or communication of emotions and ideas, a means for exploring and appreciating formal elements for their own sake, and as mimesis or representation. Leo Tolstoy identified art as a use of indirect means to communicate from one person to another. Benedetto Croce and R.G. Collingwood advanced the idealist view that art expresses emotions, and that the work of art therefore essentially exists in the mind of the creator. More recently, thinkers influenced by Martin Heidegger have interpreted art as the means by which a community develops for itself a medium for self-expression and interpretation.

These are all ways of beginning to define a work of art, to narrow it down. Robertson and McDaniel discuss the evaluation of meaning behind art in their book, Themes of Contemporary Art:

Art, at its simplest, is a form of communication. It means whatever it is intended to mean by the artist herself, and this meaning is shaped by the materials, techniques, and forms of the art, as well as the ideas and feelings it creates. Art can also simply refer to the developed and efficient use of a language to convey meaning with immediacy and or depth. Art is an act of expressing feelings, thoughts, and observations. There is an understanding that is reached with the material as a result of handling it, which facilitates one's thought processes.
Top

something made by hand simply to be enjoyed.
Top
Post Reply
27 posts