So what's really going on?

surreptitious57, before I address the substance of your reply, I am having trouble understanding how you can quote me (presumably using the site’s quote system) and suddenly all of my carefully placed commas, periods, dashes, apostrophes, arrows, and even some of my words, are missing.

What’s up with that?

I don’t mean to be anal-retentive about this

, but if you are going to “quote” us, then could you please make sure that the quote appears in precisely the form it was written.

seeds wrote: ↑Mon Jan 14, 2019 7:11 pm I hope everyone will forgive me for constantly using the same visualization tools, but imagine the large bracket depicted below...

Now as a matter of speculative logic, at no point would we ever encounter a wall that would prevent us from extending the billion-year dashes infinitely into the past.

Likewise, the same would also apply if the bracket below represented the thermodynamic ending of the universe...

...for at no point would we ever encounter a time-halting wall.

In which case, the most logical way of viewing the situation - (at least from a purely materialistic perspective) - is that the universe is simply a momentary “blip” that arose within the eternal stream of time...

...and in no way should be perceived as the moment when time “began,” as is suggested in your response.

The truth of the matter is that the universe is, in essence, a “machine-like” phenomenon whose “cogs and gears” can move no faster than the speed of light.

It is a machine that appears to have commandeered time itself and has caused all those who are caught-up within its inner-workings to be subject to the machine’s highly specific cadence.

surreptitious57 wrote: ↑Tue Jan 15, 2019 5:04 am Separating the Universe from Eternity is problematic because if the definition of Universe is ALL THERE IS then logically that would include everything outside of the Universe. So Eternity is therefore part of the Universe. And it has to be eternal because absolute nothing can only
exist infinitesimally before it is violated by quantum fluctuations

Furthermore, in tandem with the above, you also don’t seem to understand what the word “universe” means in modern-day scientific parlance, for in the context of “multiverse” theories, there could exist an infinity of other (sovereign and independent) universes.

So the word “universe” does not necessarily mean “ALL THERE IS” (especially if you factor-in the possibility of transcendent realms of existence).

And lastly, (and regardless of whether it is true or not), I am using the Big Bang theory as the basis of my assertions.

And according to the Big Bang theory, the universe allegedly (and literally) began 13.8 billion years ago as something that was perhaps as small as the tiny dot situated between these two brackets – [.] - (or even smaller).

Therefore, the entire phenomenon that we call a “universe”...

(i.e., all of reality as we understand reality to be)

...was once contained within a closed and “bounded” area that was literally no larger than that dot.

Now setting aside the mystery of where the “dot” came from...

(which, clearly, is what science does)

...not only does it represent the universe in terms of its finite size when compared to the infinite nothingness that is constantly “giving-way” to its expansion, but it also is a figurative representation of the amount of time that the universe has existed relative to eternity. 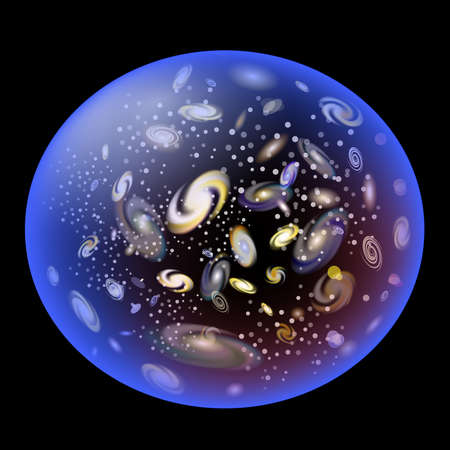