Sunspot is a plasmatic vortex

How does science work? And what's all this about quantum mechanics?

Sunspot is a plasmatic vortex

The postulation for Sunspot is a plasmatic vortex was made in the UVS research with its inductive resolution on sunspot. 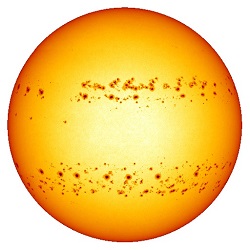 The above image of sunspot clusters was a caption from the ESA website.

The predictive power on this qualitative prediction of the UVS research lies in the coherentism of the UVS grounded theory and its comparative analyses, which were evaluated with its epistemic process and methodology.

The inductive resolution on the vortices of Jupiter was very telling with the following resolves for suggesting the sunspot is a plasmatic unisonal vortex:

In the UVS worldview, the hyperspherical vortex mechanism of Jupiter is very comparable to the Sun.

From the UVS perspective, the observed polar aurora on Jupiter suggested Jupiter could be perceived as a failed star; it merely did not have the sufficient vortically induced dynamo effect to ignite its plasma glow for its entire surface to lit up like the Sun. Heuristically, Jupiter and Sun have striking similarities in many aspects for their vortical nature, and thus are very comparable in the UVS worldview.

So, with the UVS inductive resolution to understand the underlying vortical mechanism that modulates Jupiter, it has had provided the insights for asserting sunspot is a satellite plasma vortex that was being intrinsically impelled by the nested jet streams of the Sun's nested polar vortex pair.

Heuristically, it could be perceived that the penumbra of a typical sunspot is a plasmatic chain of magnetic satellite vortices manifested in a ring torus structure that has had concentrically formed around the outer rim of its umbra.

The observed cloud bands on Jupiter with differential rotations and retrograde jet streams suggested the photosphere of the Sun could also be nested in a similar manner, and thus could somehow oscillate to render the magnetic cycle with its prograde and retrograde dynamo effects.

Its inductive resolution on the planetary rings of Jupiter suggested what could have caused the formations of the asteroid belt and the Kuiper belt.

Along with its other inductive resolutions, much on the mysterious phenomena about the Sun were thus resolved with their further analyses and case studies, which were then subsequently backed up by the lastest astronomy observations that somehow had later shown up.

With this methodology of the UVS research to visualize the underlying vortical structures and mechanisms of the mysteriously rendered natural phenomena, it thus intuitively revealed their actualities. The rest is just details.

As such, the Sun centric Solar System as we all know with the mainstream endorsed model, could be revolutionized with the paradigm shift of the UVS planetary hypersphere model that postulates a barycentric Solar System, which explicitly explicates on the actualities of the Solar System that are coherently and correspondingly referred to reality.

“All truths are easy to understand once they are discovered; the point is to discover them.” - Galileo Galilei

“If you find from your own experience that something is a fact and it contradicts what some authority has written down, then you must abandon the authority and base your reasoning on your own findings.” - Leonardo da Vinci

“We make our world significant by the courage of our questions and by the depth of our answers.” - Carl Sagan
Top
Post Reply
1 post • Page 1 of 1

Return to “Philosophy of Science”