Is there a God? If so, what is She like?

My comment was in response to sumthin' Duncan posted.

Easiest is to just demonstrate: Are you a frowulf?

Go 'test' (preen for) somebody else.
Top

You can't even figure out your own shit, but you are trying to fix the world.

Because that's what's broken, right? Not you. You are perfect and all-knowing

Which battlefield would you like me to kick your ass on today?
Pilosophy, Science or are we back to shooting at each other again?

It is because you are almost twice my age is why you have no excuse to be this ignorant!
Or maybe you just plan on doin' this one Planck's way? https://en.wikipedia.org/wiki/Planck%27s_principle


A new scientific truth does not triumph by convincing its opponents and making them see the light, but rather because its opponents eventually die and a new generation grows up that is familiar with it

"are we back to shooting at each other again?"

That would, on my part, be a waste of one shell.
Top

Re: "are we back to shooting at each other again?"

I offered you TWO other civilized options. Philosophy and science (in that order).
And yet your mind went straight to 'wasting shells'.


I come in peace. I didn't bring artillery. But I'm pleading with you, with tears in my eyes: If you fuck with me, I'll kill you. --James Mattis

If you haven't yet considered psychiatric evaluation. Do yourself a favour.
Top

henry quirk --- this is the poster I've managed to get several Muslims to agree to. If only I could distribute it to every mosque in the UK I think the problem would be well on the way to resolution. 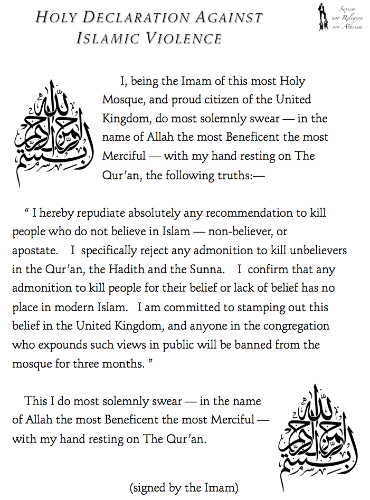 It'll be interesting to see how this plays out.

Not to be a downer, but: I suspect whatever success you see will be with folks already three quarters of the way to begin with.
Top

"I offered you TWO other civilized options. Philosophy and science (in that order). And yet your mind went straight to 'wasting shells'.

Never before have I met a person who defends 'freedom' yet rejects free will.

Are you sure you are from the US of A?
Top

I don't give a flip about freedom; I 'am' a free will.

Do you understand?
Top

I have free will. I have the power of choice. Self-determinism.
You are free will. But you dislike choice.

Sounds like you are passenger on a train to somewhere. Do you at least know where the train is going?

Of course choosing to not choose is your prerogative. Because you have free will.
Top

No, I like choice (it's my nature [and yours] to choose). What I don't like is you and your 'tests' (cuz, who are you to test me? nuthin'...nobody...you're not even worth the cost of a shotgun shell to me).

Well, you don't exactly have a great track record of explaining yourself.

Let me speak for myself, OK? I have a voice. If you want to refer to me - TimeSeeker will suffice. It is is not what I am. It is what I do.
My classification is Homo Sapiens (colloquially: human) - that is not what I am. I don't know what kind of answer you expect when you ask "What are you?". A bunch of quarks, leptons and electrons held together by various physical forces. So are you.

Whatever I am - I have free will.

Who do I have to be to test you?

To me - you are a human being. Like me. You are worth something to me. Because I believe in reciprocity and the 'no harm' principle.
That doesn't mean I expect you to reciprocate this sentiment. You have free will.
Top

I took my time with this: say 'thank you'

"I believe in reciprocity and the 'no harm' principle."

You're a compassionate libertarian: fair enough.

You're also a strutting peacock.

You're bright, but stunted.

And: you presume too much.

Now: can we stop, leave each other be?

Yeah, I think we can.
Top

Six Sigma at many organizations simply means a measure of quality that strives for near perfection. Six Sigma is a disciplined, data-driven approach and methodology for eliminating defects (driving toward six standard deviations between the mean and the nearest specification limit) in any process – from manufacturing to transactional and from product to service.
https://www.isixsigma.com/new-to-six-si ... six-sigma/

Yes. You call it Six Sigma. I call it systematic. It is the only approach that actually works...

Because you find out really quickly (low latency feedback) if anything is improving. If "Religion" is "going down by 50 % year on year" and evil is not.

You fucked up somewhere in your reasoning.

Note 'system' is very generic which is reducible to the input-process-output + control feedback.

Six Sigma is a very specific methodology that utilize system theory but the input objective is based on the 6 sigma [6σ] of the Normal Distribution.


A six sigma process is one in which 99.99966% of all opportunities to produce some feature of a part are statistically expected to be free of defects (3.4 defective features per million opportunities). e.g. Motorola set a goal of "six sigma" for all of its manufacturing.

Because you find out really quickly (low latency feedback) if anything is improving. If "Religion" is "going down by 50 % year on year" and evil is not.

Depending on which religion.

If 100% non-Islamic religion [number of believers], then evil is like say 10%.
It these religions are reduced to 50%, there would be no significance reduction in evil.

My estimation is at present Islamic-based evil acts is 90% [numbers and weightage] of all religious evil acts.

If Islam is reduced to 50% [number of Muslims] there is also no significant reduction in the % of Islamic based evil. Probably Islamic-related evil will be reduced by 5%.
The reasons being;

First the loads of immutable evil elements are still present in the religion to inspire and motivate SOME evil prone believers carry out their divine duty pertaining to these evil elements in the name of their God.

Even if we reduce the number of Muslims to 100 million, the threat of Islamic related evil will still be there due to the immutable evil elements in the Quran [core ideology of Islam].

I see the most effective ways to remove religious-related evil acts is to wean of Islam, being the critical element.

I agree, if we remove all religions, there will still be an evil potential because the potential of evil acts is inherent within human beings.
In this case we can address the issue of all evil by other effective means under the umbrella of the Framework and System of Morality and Ethics which promote good and strive to get rid [or reduce] evil to the minimum.

Note I agree the above is all talk at present but I am optimistic given the current trend of progress we will be able to make significant progress in the near future.


You fucked up somewhere in your reasoning.

Don't be too hasty.
I have lots of reserves of knowledge [in areas I participates].
In general*, where have you caught me without an answer to your interrogation?
* I am not perfect so there could be rare exceptions.
Top
Post Reply
273 posts

Return to “Philosophy of Religion”